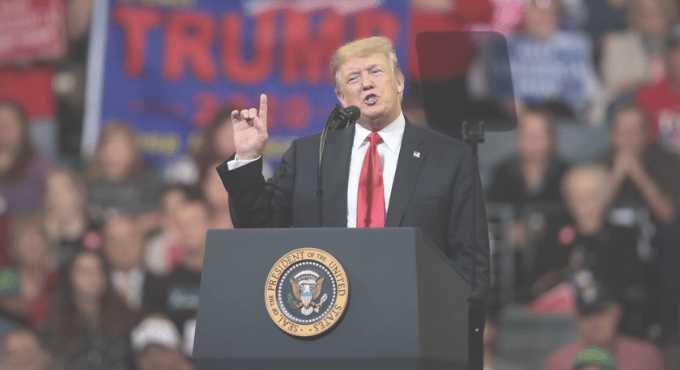 Born on June 14, 1946, in New York, Trump started his life as a businessman who dealt in real estate and managed many properties such as hotels, casinos, golf courses etc.

Trump came from a well-settled family where his father, Frederick Christ Trump, was a successful real estate developer. Trump had five siblings in which he stood at the fourth position. Following his father’s legacy, Trump started his own business primarily in New York but soon expanded all across the globe.

Donald Trump is the true definition of the American success story. Continually setting the standards of business and entrepreneurial feats, Donald Trump had built tremendous success in his private life long before entering politics. Domains of business such as real estate, sports, and entertainment are still considered his specialty.

Donald Trump had been married three times. His first wife was by far the most famous one—a Czech model and athlete named Ivana Zelnickova. Donald and Ivana had three children Donald Jr, Ivanka and Eric. Unfortunately, the couple filed for a divorce in 1990.

Donald’s divorce story took to heights in the media, where there were several speculations regarding him being abusive towards her. Still, she later downplayed these incidents, and the stories settled down.

His second marriage was with an actress named Marla Maples. Donald and Marla had a daughter named Tiffany, but soon they divorced and separated in 1999. In 2005, he married his current wife, a Slovenian model, and both have a son named Baron William Trump.

His early children are still being supported by their father and help run the Trump organizations. Following her father’s footsteps, his daughter entered politics, where she and her husband Jared Kushner served as senior advisers. To date, Donald has four adult children as well as ten grandchildren.

Showing remarkable success in his private life, Donald decided to run for the presidency on June 16, 2015. Competing with 17 other nominees for presidency, in July of 2016, he won the Republican nomination for the President of the United States of America.

Before Joe Biden broke his record in the year 2020, Donald Trump set the record in 2016 for the most votes received for a republican candidate with a whopping 62 million. Long before he got famous for the President of the United States, Donald Trump was one of the most famous Billionaires of America.

Another surprising fact being that Trump has written several best selling books on entrepreneurship and his business career. His most famous book, The art of deal(1987), is still considered a classic for business people today. The total worth of this esteemed businessman and former President amounts to around USD 2.5 Billion.

After becoming the President, he brought his same business success into his political career. During his presidency, he achieved remarkable feats for America. A record-setting tax and regulation cuts replaced the NAFTA with the United States Mexico Canada Agreement, gained total energy independence, wholly rebuilt the army with an investment of 2 trillion dollars,

secured the nation’s borders, achieved a significant peace breakthrough in the Middle East, annihilated the ISIS caliphate, Launched a space force, signed bipartisan criminal justice reforms, passed the most significant veteran affairs reforms in half a century, lower drug prices, made improvements in the medical sector and social security and secured many more feats to his name.

Launched the most extensive national mobilization

He also launched the most extensive national mobilization due to COVID-19, which is considered the biggest since world war 2. The Trump organization also gave one of the most significant financial reliefs in American history, creating the most advanced testing system and developing effective medical treatments.

Trump again ran for the presidency in 2020, but he lost to Joe Biden over a tiny margin. However, his ambitions of taking hold of the country are far from over as he wishes to again run for the President in the future elections.