Almost two decades ago, Simpson predicted that Donald Trump would become the president of the United States. And guess what? He IS the president of the US. However, things were all fun all games with Simpsons prediction until fans believe that the cartoon predicted about the now most viral virus disease called coronavirus or COVID-19. In this blog, we are going to see whether the makers of the famous cartoon show, The Simpson, predicted things right or was it all just a mere fan function.

Recently numerous rumors started to surface on the internet that showed that the cartoon predicted the arrival of coronavirus in the United States. 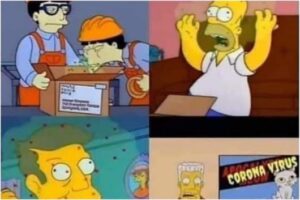 Not only this but The Simpson Movie released in 2007 showed Tom Hanks, voicing himself, saying that he has been quarantined by the United States Government. Now 13 years later Toms Hanks and his wife Rita Wilson announced that they are in quarantine after being diagnosed with coronavirus.

These creepy clips started circulating all over the internet claiming that makers of the cartoon had long ago predicted the arrival of the disease and its spread across the nation.

Seeing all the propaganda and chaos surrounding the cartoon series, Bill Oakley the co-writer of Simpson’s 1993 episode of Osaka flu criticized those who were linking the cartoon’s episode with the coronavirus debacle.

Talking to The Hollywood Reporter Bill Oakley said that he finds it gross that fans have started connecting the cartoon with the agenda that coronavirus is a fully plotted Asian conspiracy. He further added that the episode with the Osaka flu was inspired by the Hong Kong flu in 1968 and was supposed to be a quick and short joke about how the flu reached the town, Springfield.

Check Also: How to turn off Tumblr safe mode 2021?

While the fiasco behind the Simpson predictions and the coronavirus has somewhat settled doing we have collected more such evidence that shows the cartoon is more than just a cartoon.

It is not completely shocking that the cartoon running for more than 30 years has something in it that is now real. However, the weird part is that the creepiest thing in the cartoon that they never imagined could come in real life, occurred years later.

We have listed down some of the strangest yet interesting predictions made by the cartoon writers since the show first launched in 1989: 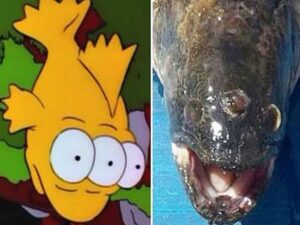 Appearing in episode 4 of season 2 of The Simpson a three-eyed fish named Blinky was something no one thought could appear in real life, but it did.

In the episode, Bart catches Blinky in the river, which was located by the power plant, and made it to the local headlines. 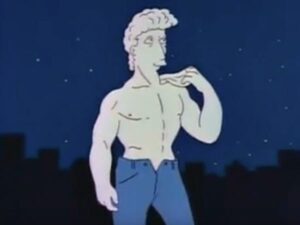 An episode released in 1990 showed the residents of Springfield marching against Michelangelo’s statue of David located in the local museum. The Springfieldians believed that the artwork was inappropriate and comes in the manner of nudity.

And in 2016 the statute censorship came true when Russian voters voted to put the cloth on a copy of the renaissance statue set up in central St. Petersburg.

The Siegfried and Roy Tiger Attack:

In the episode where the Simpson parodied the entertainers, Siegfried & Roy in their episode showed that a white tiger attacked the magicians while they were performing in the casino.

In addition, in 2003, one of their white tigers attacked Roy Horn during a live performance.

In their episode aired in 1995, the Simpsons put forward the idea of a watch that you could use as a phone.

In addition, nearly 10 years after the first Apple watch was released.

If like us you too want to watch Simpson all over again and find the missing predictions and clues then all you need is a good internet connection. The fans in the United States can watch Simpsons on FXNOW with their high-speed internet only by contacting Spectrum Internet Customer Service available in 40+ states.

The Simpson is one entertaining cartoon series that can have you stuck to the television for hours. However, with their strange predictions that later turned into reality, the Simpson is again in the news. We have listed some of the interesting predictions by Simpson writers in our blog along with their take on cartoon’s link-up with coronavirus in one of the Simpson episodes.